A Community’s Response Against Hate

On Friday morning, the house of two local and outspoken civil rights advocates—Xia Wang and Ben Christensen— was vandalized, again. This was the fourth time it has been targeted according to the couple who believe that these are hate crimes.

These incidents started last August, and began with the theft of a Black Lives Matter Sign from their yard. Wang replaced the sign with a homemade one that was later defaced by someone spraying “ALL” over the sign in red paint. In August, one of Wang and Christensen’s Black Lives Matter signs was defaced with a red “ALL.”
[James Croxton // Double Sided Media]

After the second incident, Wang and Christensen decided to contact the local authorities to report it as a hate crime. The couple also installed cameras on their property in an effort to both document any future vandalism and to feel more secure.

They have lived in the house for six years. Wang said “Before August, this house and neighborhood was quiet and safe.” Their feelings of safety and trust in the community has dwindled as the incidents have continued.

Wang left the defaced sign up in hopes of garnering support from their neighbors.

But a third event involved a person dropping off a note on the lawn under the defaced sign. Wang and Christensen took this as a threat and reported it. 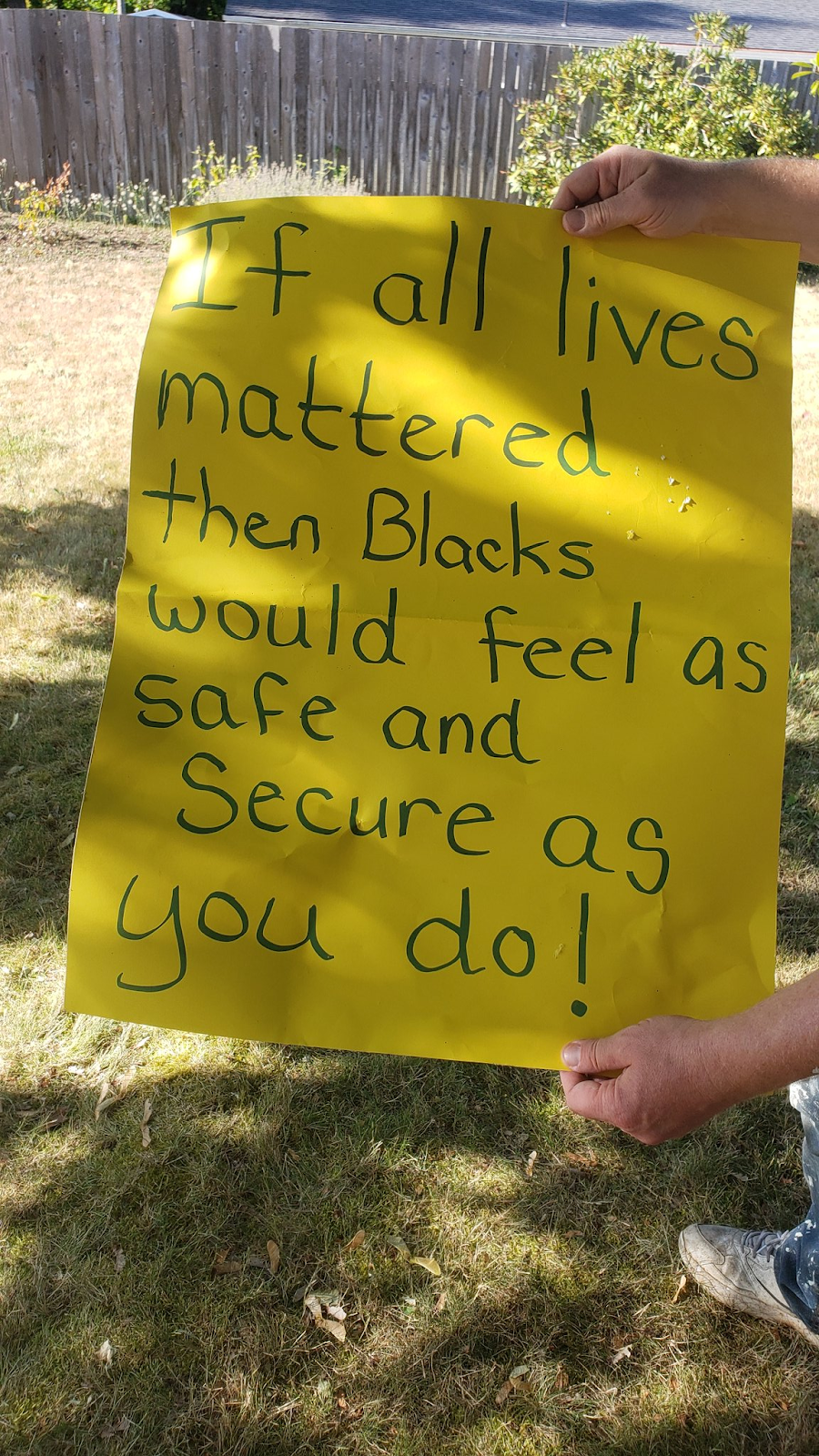 Shortly after their sign was defaced, this note was left up against a tree in their yard.
[James Croxton // Double Sided Media]

Lane County Sheriffs have been slow to investigate, often telling the couple that there isn’t enough evidence from their surveillance cameras or basis to claim that these are hate crimes.

Friday was no exception.

At 4:30 a.m., the couple was startled out of sleep by the sound of 27 red-filled paintballs striking their home and vehicle from a passing SUV. They called the non-emergency number at 4:50 a.m. to report the incident but the sheriff did not respond to the home until after 9 a.m. 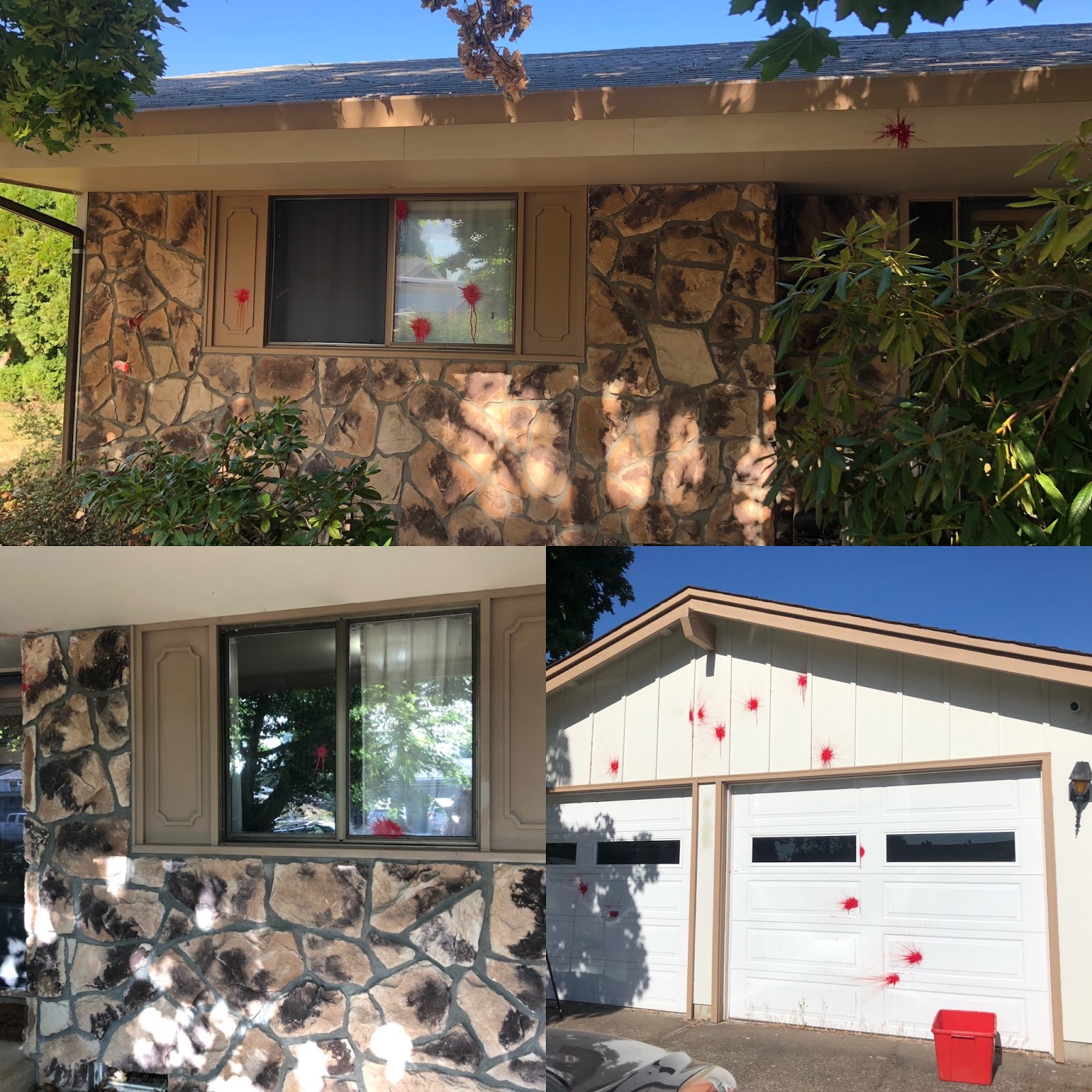 Currently, the incident is classified as criminal mischief, not as a bias or hate crime, nor as unlawful use of a deadly or dangerous weapon. The sheriff also explained that it’s not likely a targeted event because there was more paintball damage in the area but he failed to say where.

Undeterred by the lack of concern from local authorities, Wang and Christensen called upon the community to show up in support as a sign of strength against these attacks.

Christensen, who holds a criminal justice degree, believes that these crimes are part of a larger community problem. Specifically, problems involving the police and systemic racism. He believes that the lack of policing these types of issues will continue unless the community becomes more aware and involved

He wants the community to help hold the police accountable to protect and serve. He said that “when one system fails, they all fail.”

So, the couple hosted a community clean-up and asked neighbors, friends, and strangers to come help remove the red paint later that evening. A table is set up with pizza, cookies, and beverages by community volunteers for those helping to clean up the red paint.
[Mary Bell // Double Sided Media]

Laughter-filled conversations sprung up around the snack table between old friends and new acquaintances. Many offered their expressions of condolences and solidarity to Wang and Christensen, saying that “hate is not welcome here.”

Taking a moment to step back and capture it all, Wang said “I didn’t cry about the paintball attack, but seeing the way the community has responded is enough to make me break down in tears.”

Over the course of the next two-and-a-half-hours, everyone worked diligently trying to remove the red paint from the house, garage, and cars. However, this task would prove to be more difficult than first expected.

Recreational-grade paintballs are typically filled with water-soluble paint resulting in easy clean-up. Moreover, many major paintball facilities frown upon the use of red paint, or ban it altogether due to concerns that it looks too much like blood and may mask any real trauma induced by the sport.

However, high-grade paintballs are often filled with oil-based paint making them more difficult to remove.

These types of paintballs are generally used for professional paintball competitions which prohibit the use of red or pink filled shells. Furthermore, higher-grade paintballs are also used for marking, or labeling trees and livestock in difficult to reach places or from great distances.

Markings left by these oil based “pellets” can last for 4-6 years and are commonly done with red paint.

Continued Clean-up and a Local Business Comes to the Rescue

It became obvious that the paint was oil based. Efforts to remove the paint with warm water and soap only seemed to spread the paint around. More aggressive solvents were not more effective either.

Bristle brushes were used to scrub the paint but worsened the damage in some places—leaving scratches or removing the house paint—which had just been reapplied two weeks prior.

The paint even outlasted two power washers supplied by friends.

At around 8:00 p.m., the cleaning crew began wrapping up with plans to return to finish cleaning and to redo the house paint.

Again, on Saturday, another crew of volunteers arrived beginning at 5:30 p.m., including Springfield City Council President, Steve Moe, who chatted with the community members.This time they were aided by a local exterior cleaner Jeff Jones of Apex Outdoor Cleaning who learned of the hate crime and provided his cleaning services free of charge. Primer being applied to the damaged areas around a window ahead of new paint. Much of the house’s exterior was painted two weeks prior.
[James Croxton // Double Sided Media] Jeff Jones of Apex Outdoor Cleaning heard about what had happened and provided his services free of charge. Wang and Christensen’s home address has been blocked out.
[James Croxton // Double Sided Media]

Over the course of the two day cleaning event, hearts were connected, community was renewed, and all signs of the hate crime and red paint were gone. Wang felt so renewed she opened her lawn to her neighbors.

She is now providing a seat welcoming anyone who would like to sit and chat. Wang says she is choosing to no longer live in fear. Instead now she wants to get to know her neighbors. Instead of living in fear, Xia Wang has set-up a table and chairs on her lawn where she hopes to meet her neighbors.
[Mary Bell // Double Sided Media]