Beginning at 11 a.m. Eugene Housing and Neighborhood Defense hosted a protest welcoming the 2021 Olympic Trials for Track and Field at the University of Oregon’s Hayward Field. Activists with Eugene HAND protest in front of an entrance to the Olympic Trials at Hayward Field. [James Croxton // Double Sided Media]

Prior to the protest, HAND, who describe themselves as “a local org of tenants dedicated to protecting our neighbors from exploitation by the capitalist class” posted on Instagram explaining the reason for the protest.

“The Olympics has historically been an imperialist project in service of the elite and corporations.” Specifically, as the trials relate to Eugene, the post said “since 1978, this event has been held six times in Eugene and the main beneficiary is Nike — [a] multi-billion dollar company employing forced, exploited labor.”

About Hayward Field, the post said that “Hayward Field, an estimated $270 million project was funded primarily by imperialist Phil Knight, CEO of Nike.” Further, “the University of Oregon continues to be a puppet for Nike’s expansion into the community — Hayward Field pushes out renters and unhoused people in surrounding areas through rent hikes and policing in order to boost NIke sponsorship and retail sales from the Olympic Trials.”

After gathering at Washburne Park, the group of approximately 20 people wearing red bandanas marched through the neighborhood towards the campus with banners that read “Death to Nike Imperialism” and “Solidarity with the International Working Class” while chanting “Renters shouldn’t live in fear, we don’t want Olympics here!” Activists with Eugene HAND march through the University of Oregon campus towards the Olympic Trials at Hayward Stadium. [James Croxton // Double Sided Media]

Many in the crowd passed out zines—paper copies of their Instagram post—to those around that were watching from the sidewalks. Some, curious about the reason for the protest, also walked up and directly asked for them.

At 12:20 p.m., the group arrived at an entrance for the trials, held their banners up, and spoke to the gathering of security that had amassed while officers with the University of Oregon Police Department watched from the sidewalk.

One speaker said that they wanted people to know “what an absolute scam and waste of many this event is,” adding that “at least $270 million went into the new construction of Hayward Field while us, working class Eugenians, have been suffering.” They also added that survivors of the Holiday Farm Fire were evicted from their hotel rooms to make room for the Olympic Trial athletes. 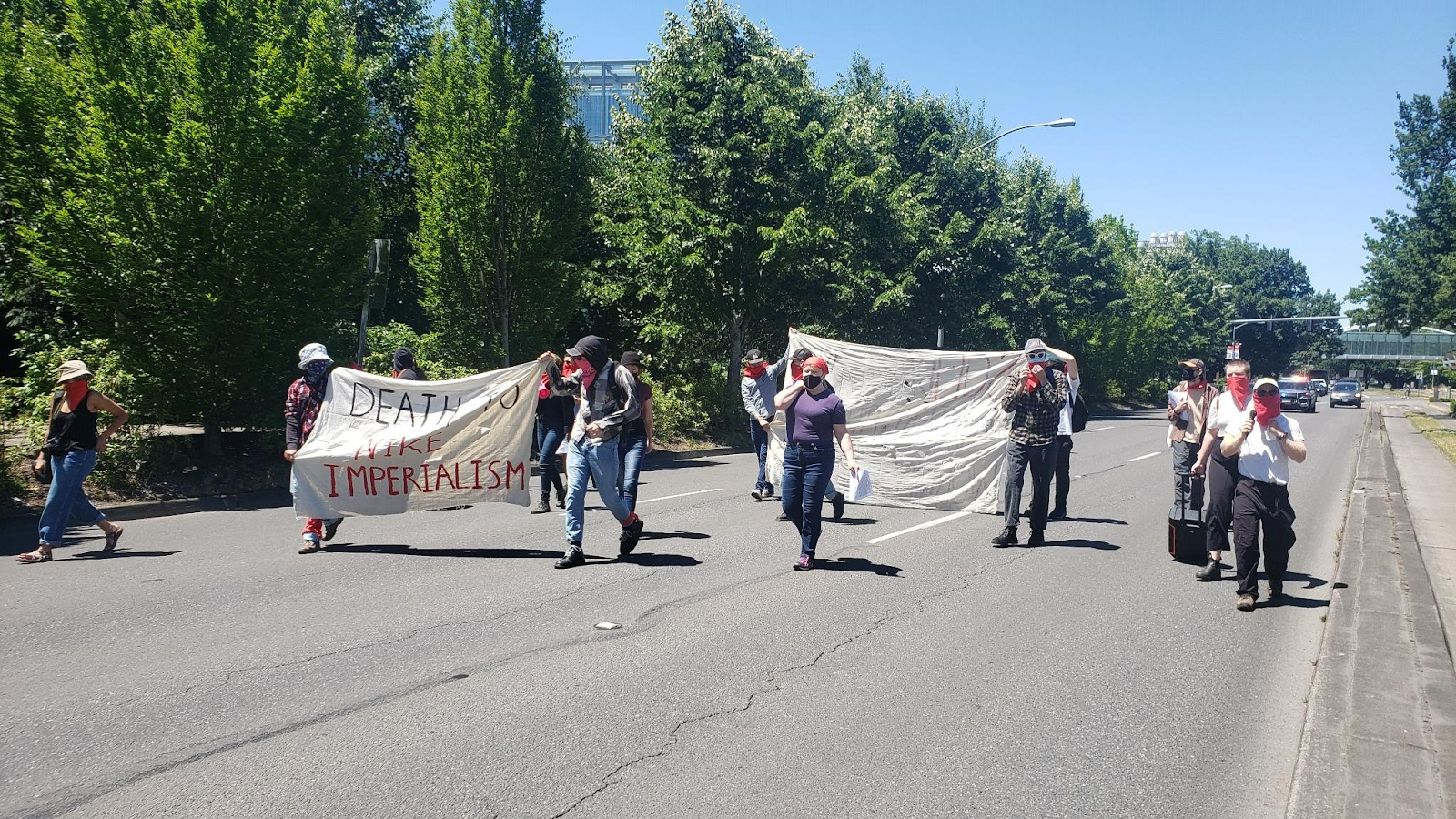 After a little while, the group left the entrance area and marched on Franklin Blvd.taking the long way back to where they started from while two Eugene Police Department officers held up traffic in the back.

The group arrived back at Washburne Park just after 1 p.m. and disbanded. Their press release can be found here.